The 23rd Rendezvous Istanbul International Film Festival will be bringing a total of 30 films from Turkey and the UK together online until December 23rd. This year the festival started off with its first ever online awards ceremony.

The awards ceremony of the 23rd Rendezvous Istanbul International Film Festival organized by the Turkish Foundation of Cinema and Audiovisual Culture (TÜRSAK) with the contributions of the Directorate General of Cinema of the Republic of Turkey Ministry of Culture and Tourism was held online yesterday. This year, due to the pandemic, the festival will be bringing together all moviegoers online with movie screenings and other events until December 23rd. At the awards ceremony of the festival, the International Rendezvous Award, the Contribution to Culture and Arts Award and the Contribution to Cinema Award was rewarded.

Burhan Gün, the director of the festival and also the Vice Chairman of the TÜRSAK Foundation was the first to speak at the awards ceremony. Stating that they organized the festival online during those difficult times of pandemic and no attainable film theatres, he emphasized that they were able to reach a much wider audience online.

Elif Dağdeviren, the Chairman of the TÜRSAK Foundation who had the floor right after Burhan Gün stated that the festival is very special as it strengthens the intercultural communication by focusing on a different country each year. Explaining that besides the film screenings at the festival, panels and industry meetings will be held with esteemed participants, she concluded her remarks by wishing a great time at the festival to those who will watch the anthology of Turkish and British films.

Deputy Minister of Turkish Culture and Tourism Ahmet Misbah Demircan also made a speech at the ceremony. He said that each and every country and nation is in an effort to introduce its own culture and emotions to other countries, and that film festivals offer a very suitable environment for this. Drawing attention to the fact that a similar environment was procured with the Rendezvous Istanbul International Film Festival organized by the TÜRSAK Foundation, Ahmet Misbah Demircan expressed his wishes to meet again at the festivals in the following years.

Winner of the “Contribution to Cinema Award” Kadir Beycioğlu

After the opening remarks came the distribution of the awards. At the ceremony, the winner of the Contribution to Cinema Award, which is given to individuals and institutions that contribute to the development and industrialisation of Turkish Cinema, was announced. The career of this year’s winner, the Chairman of the Educational Administration Research & Development Association and also a Council Member of the European Educational Research Association Prof. Dr. Kadir Beycioğlu started with the 2nd International Ankara Film Festival and advanced with his engagement in a wide variety of festivals as founder and advisor. Lately, he made remarkable contributions to the Turkish cinema through festivals alongside the Directorate of the Adana Film Festival. Expressing his joy during his acceptance speech, he added that the contributions to the Turkish cinema through the efforts made by the film festival organisers gained visibility and meaning thanks to this award. He also said: “I think the award has a side to it which will encourage the festival staff in their works”.

Winner of the “Contribution to Culture and Arts Award” TRT

Another award announced at the ceremony was the Contribution to Culture and Arts Award, which is given to individuals and institutions that make a difference in the field of culture and arts. The winner of the award, the Turkish Radio and Television Corporation (TRT) has been standing out with the production support it has given to young people in recent years, promoting culture and arts through the TRT 2 channel, supporting the Turkish cinema through platforms such as “12 Punto TRT Script Days”, collaborating with many international film festivals including the Sarajevo Film Festival and producing award-winning feature films. The award was presented to the General Manager of TRT, İbrahim Eren. In his acceptance speech, he stated that TRT has carried out many new projects in terms of contribution to culture and arts in recent years and added that their biggest aim with such projects is to contribute to the industry.

The third award announced at the ceremony was the International Rendezvous Award, the first of which was given last year, and presented to people who have contributed to the recognition of Turkish Cinema abroad and also international cooperation. The winner of the award, producer Timur Savcı has produced many motion picture and television productions with TIMS Production he founded in 2006 and contributed greatly to the rise of Turkish TV series in the world with his 2011 TV series The Magnificent Century, which was broadcast in more than 100 countries and has been the subject of dozens of academic studies. In his acceptance speech, Timur Savcı thanked the TÜRSAK Foundation and said that the award was a great honour to him. Adding that he will keep on doing his best for the cinema industry, he stated that the award also motivated him in doing so.

The films screened as part of the festival can be watched on www.randevuistanbul.com until December 23rd. 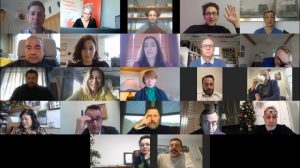 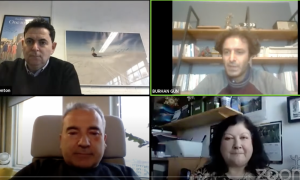